I wrote about task queueing and how I decide what to do next.

Check it out here: Task Queueing with Microsoft Planner and To Do

Gather.Town
One of the magical things about gathering in real life is the ability to peel off. Sometimes you take a quick wander to explore the space, or because you need an introvert moment. Sometimes you run into someone you haven't seen in forever and you catch up for a while. Sometimes, if you're lucky, you and a few people spark (oh my god y'all love Aeon Flux too?????[2]), and you steal away to nerd about a rare passion.

Gather is the first online meeting software I've seen that allows people to peel off. Which is to say, it's been my first glimmer of that magical thing while we're all very distant from each other. 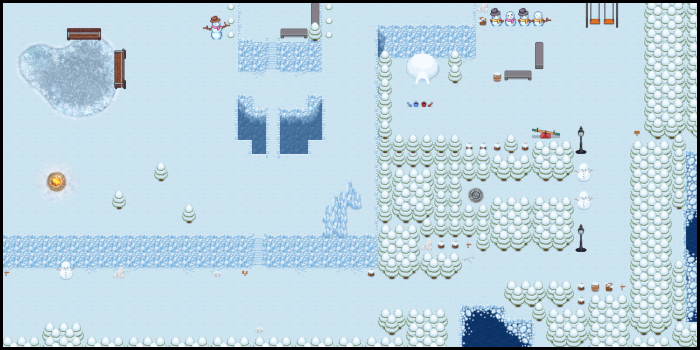 Gather.town is video meeting software parked inside an old school video game that's had all the "game" parts stripped out. You use a little character to walk around the map, but there are no enemies, no treasures, and no mysterious old men handing out swords.[3] The map and your little character help emulate a real life trait of gathering: you have to approach someone to talk to them.

What does this mean functionally? A few weeks ago I had a 12-15 person digital gaming session: after a brief group discussion near the frozen pond, half the guests stayed put to play one game, and the other half wandered off to the swing set and played a different game. At least I assume they played a game... they definitely wandered off. Once their in-map characters walked away from mine, their video and audio feeds went with them.

In some important ways, Gather feels like an in-person party: everyone is in the same space and generally accessible, but in any given moment you're only talking to the people you're talking to. And if you'd rather catch up with friends and sit out the first round of games, you can peel off, head to some digital benches, and do just that.

Get started quickly with one of Gather's maps
The best way to get a feel for Gather is to find a few friends, grab one of their prefabricated maps, and try it out for a few minutes. And honestly, their sample spaces are awesome... Moonpond is a personal favorite.

You don't need to create a custom map to have a great time in Gather. I created a custom map because that's my idea of fun; it's entirely unnecessary. If you just want to jump in and hang with your friends, use one of Gather's maps and you can be up-and-running in less than 3 minutes.

Map design in Gather
Here are some thoughts from my design process.

Creating pockets
When considering gatherings in the analog world, I create pockets of various sizes so guests can explore and settle where they feel most comfortable. I considered the same when creating this digital map. 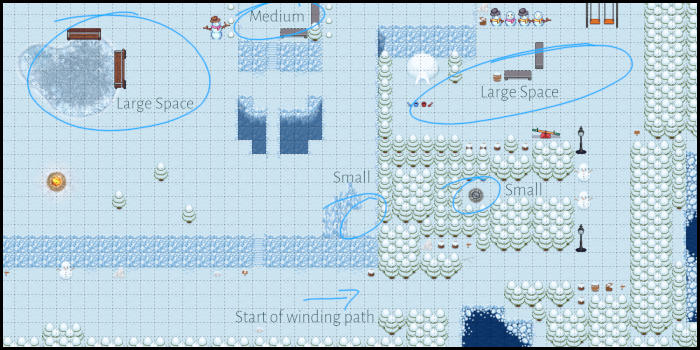 In the image above, I've circled some of the large, medium, and small areas I intentionally designed into the map.

Private Spaces
Private spaces are special tiles on the map that can only communicate with other selected tiles. 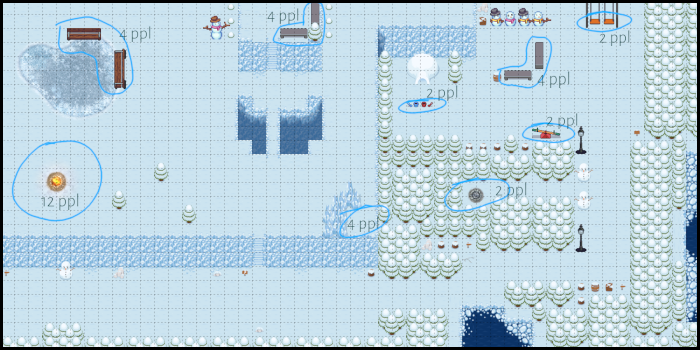 In the image above, the two benches in the upper left are a single private space... 4 total tiles. A person standing on one of those bench tiles can only communicate with people standing on the remaining 3. I scattered private spaces throughout the map, as circled above, for quick access to privacy.

Interactive Objects
Gather has an option that allows for objects to be interactive... I took that opportunity to drop some easter eggs onto the map. There are invisible objects scattered about the map that activate paused YouTube videos for guests as they walk by. For example, someone who wanders onto the frozen pond is treated to a video of Snoopy ice skating, backed by the Vince Guaraldi Trio.

The Tools
Here are the tools I used to build my custom map in Gather.[4] While I'm not an expert, and I'm sure there are many key features I haven't learned, yet, I was able to go from zero-to-finished in about 1 week. (Including the time it took to research what tools I should download/purchase.)

Your standard Gather map is a bunch of image tiles that have been placed on a grid.

Tiled is a program that makes it easy to place a bunch of image tiles on a grid.

If you're building a custom map, Tiled (or something like it) is a very useful tool to place everything where it needs to go.

Itch.io is an online marketplace for software. Itch.io is a good place (the only place?) to download Tiled.

While Tiled makes it easy to place image tiles on a grid, you still need the actual image tiles. Gather has created a set of tiles that are publicly available.

Winterland Tileset (to use with Tiled)
https://pzuh.itch.io/winterland-top-down-tileset

Most of my map was built with the Winterland tileset... it had the perfect vibe. Itch.io is a good (only?) place to grab it.

I also used an asset or two from the Christmas Graphics tileset and Winter Wilderness tileset. (Mainly igloos and a frozen pond, respectively.)

Bimp for Gimp (to resize tiles for Tiled)
https://alessandrofrancesconi.it/projects/bimp/

The image tiles you purchase may not be the correct size for Gather's grid.[5] Bimp was clutch in resizing an entire folder of images with minimal effort.